One of the latest trends in aircraft industry is towards bleed less engines since these are more fuel efficient. The Boeing 787 for example has bleed less engines and therefore also a wing ice protection concept based on electro thermal heaters contained by its leading edge components.

In this context, an Electric Ice Protection System (EIPS) based on FML / Glare is being developed for future aircraft. Technical feasibility of this system has been proven with NASA ice wind tunnel testing and a successful test flight.

Glare itself is an excellent material for leading edge skins since it combines good impact properties with low weight. The self-forming FML manufacturing technology enables the integration of heater elements in the laminate. These are positioned as near as possible to the outer metal layer of the FML for gaining an optimal thermal efficiency. The thus built skin is attached to a back-up structure, which can be a fixed leading edge or a movable slat. 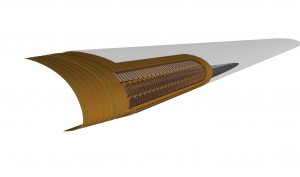 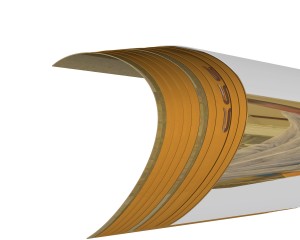